The Bureau of Investigative Journalism, based on extensive research in mid-2011, claims that at least 385 civilians were among the dead, including more than 160 children.[4] In July 2009,Brookings Institution released a report stating that in the United States-led drone attacks in Pakistan, ten civilians died for every militant killed.[5][6] S. Azmat Hassan, a former ambassador of Pakistan, said in July 2009 that American UAV attacks were turning Pakistani opinion against the United States and that 35 or 40 such attacks only killed 8 or 9 top al-Qaeda operatives.[7]
Although it may never be known how many civilians have died as a result of U.S. UAV strikes in Pakistan, there are estimates of hundreds or thousands of innocent bystanders who have perished in such attacks.[8] Pakistani authorities released statistics stating that between 1 January 2009 and 31 December 2009, U.S. RQ-1 Predator and RQ-9 Reaper UAV strikes have killed over 700 innocent civilians. The website PakistanBodyCount.Org (by Zeeshan-ul-hassan Usmani, a Fulbright Scholar at the Florida Institute of Technology) shows 1,065 civilian deaths between June 2004 and 30 January 2010 and tallies 103 UAV strikes carried out by the United States.[9] 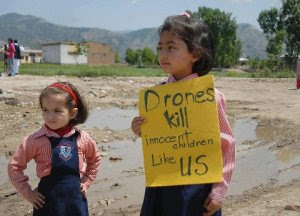 Posted by Richard Dwen at 9:35 AM No comments:

WE NEED TO SET A BETTER EXAMPLE FOR OUR KIDS

A girl holds on to a fence at a transit camp housing migrants and refugees in Slavonski Brod on Nov. 4. Canada has good record and reputation for human rights and should show leadership in such international issues as the refugee crises, columnist Farid Rohani writes.

Posted by Richard Dwen at 2:44 PM No comments: