We Were All Children Once

Children bought up in brutal conditions grow into brutal adults as a general rule of thumb. What can be done to prevent children being forced to become child soldiers, children being traded and sold in human trafficking that exists in so many places around the world?  All this in an age when we are building a new space program, medical science is making amazing advances, more women around the globe are attaining more rights and education is becoming a staple in countries that not too long ago had few if any classrooms.

How can you help children or a child in dire need. Use the Internet and Google a charitable organisation near you. You can help either locally or globally through an organisation such as the ones you see on this link.

Do your due diligence though. There are many scams out there and there are many charities that have very heavy admin charges with simply not enough funds from contributors getting through to the children that need them. By estimates, there are 45.8 million people are enslaved across the world. Global Slavery Index 2016 key findings: Total number of people enslaved globally: 45.8 million people. Enhanced methodology reveals that 10 million more people are enslaved than previously estimated – a 28% increase. Many many, of them are children.

How comfortable are you in your current life? Comfortable?  Maybe its time to forgo that planned cruise or the 2 months "in the desert" and channel that money to children who have been bought into this world and know nothing but suffering. 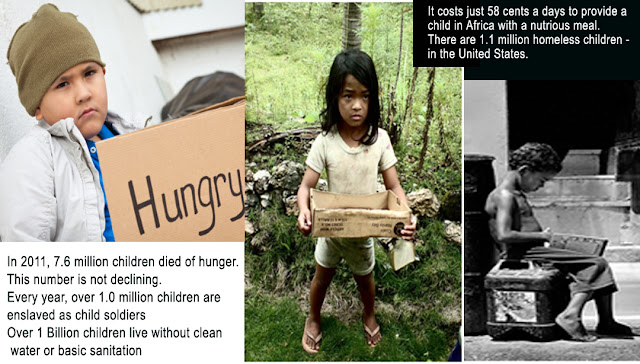 Posted by Richard Dwen at 9:43 AM No comments:

Great News for the Future of the Oceans for our Children

Scientists have created a substance capable of “eating” plastic that could help tackle the world’s pollution problem.

The substance is based on an enzyme – a “biological catalyst” – first produced by bacteria living in a Japanese recycling centre that researchers suggested had evolved it in order to eat plastic.

Dubbed PETase for its ability to break down the PET plastic used to make drinks bottles, the enzyme accelerated a degradation process that would normally take hundreds of years.

Decline in plastic bags on seabed shows tackling waste is working
Fine-tuning this naturally produced enzyme allowed a research team to produce something capable of digesting plastic more effectively than anything found in nature.

By breaking down plastic into manageable chunks, the scientists suggest their new substances could help recycle millions of tonnes of plastic bottles.

Plastic is notoriously resistant to natural degradation, and the discovery of the Japanese plastic-eating bacteria in 2016 was heralded by experts and commentators alike as a potential natural solution to plastic pollution.

While attempting to verify these claims, University of Portsmouth biologist Professor John McGeehan and his colleagues accidentally created a super-powered version of the plastic-eating enzyme. 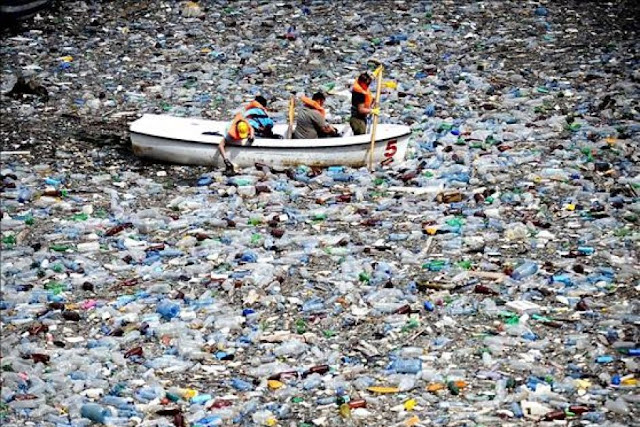 Posted by Richard Dwen at 7:28 PM No comments: