My dream on developing the Greanwold brand has always had one main focus. To generate revenue that will flow to the Greanwold Foundation for Kids Worldwide. As with any project, there are investors who expect a return on their investment, overheads to be covered, loans to be paid back and funds to be put aside for growth.

These taken into account, the balance of revenues will go to the foundation. The foundation will be managed by Christy Ellynby, the originator of the little character that became Greanwold. Christy lives in New Zealand and has a lifetime of experience, both work and personal with children and families. Christy will work in conjunction with a board of directors, yet to be named.

How did the idea for the foundation come about?

Some years ago, my wife and I traveled to several third world countries. In the course of our travels, we came across a number of children living in dire poverty with little chance of an education, no medical care and an uncertain future. One small boy, I would say around the age of 10, was supporting his family by acting as an unofficial guide at the Angkor Wat complex in Cambodia. His father was injured, he had several younger siblings and lived in a 3 room, thatched roof, for the lack of a better word, shack.

He asked for $5 to act as our guide but said he had to be careful as the tourist police would take his money and throw him out of Angkor Wat complex if he was caught. We gave him $10 that we later found out was the cost of one month schooling in Cambodia. No free education there.  The average annual income is USD$950.

This was just one incident. There were many others.

Another introduction into the dire straights of many of the world's poorest children was through a young lady I met several years ago who worked as a volunteer at an orphanage in Thailand at the border of Myanmar at the Baan Dada orphanage. 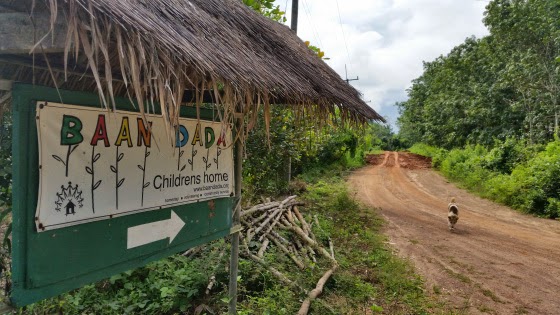 Most of the children at the orphanage come across the border from Myanmar, either orphaned after losing their parents through the brutality of the military regime or were sent across the border because their parents could not longer afford to look after them. The orphanage relies solely on donations from individuals and the Neo Humanist Foundation.

If you are interested on knowing more, please email me. admin@greanwold.com I would be happy to provide further information.

If you would like to help getting Greanwold off the ground, please click on the Greanwold on Kickstarter image at the top of the page. You will be supporting children, far less fortunate than your own. Thanks.
Posted by Richard Dwen at 12:44 PM