And Trudeau's government is failing their children.

The level of mercury found in the umbilical cords of babies in Grassy Narrows First Nation was high enough to affect their brain development, according to a new report obtained by the Star.

Between 1978 and 1994 Health Canada tested the umbilical cord blood of 139 infants in Grassy Narrows.

“At these cord blood concentrations, there is consensus from the scientific literature that there would be effects on children’s neurodevelopment,” the report, written by Dr. Donna Mergler, says.

In the report, the leading expert reviews decades of scientific research on mercury’s effects and highlights the hidden impact of contamination on a community.

Mergler said that what recent science tells us is that mercury poisoning occurs at low levels previously thought harmless. At these low levels, a fetus is vulnerable to cognitive damage even if the child’s mother does not show signs of poisoning.

The scientist, whose research specializes in the effects of environmental pollutants such as mercury, wrote it was “surprising” that although world-renowned Japanese researchers had identified many cases of mercury poisoning in Grassy Narrows, there has never been a “scientifically sound” community-wide examination of pre- and postnatal mercury contamination.

Advocates for Grassy Narrows have been trying to obtain the original cord blood data and other information collected by Health Canada over more than two decades so that their own experts can analyze it.

For six months, Health Canada said it would not release the data — even with identifying information removed — citing privacy concerns, according to email correspondence obtained by the Star.

On Thursday, one day after the Star asked Health Canada why the information could not be released, First Nation community advocates received an email from the regulator saying they could have the data.

The original contamination began when a Dryden, Ont., paper plant dumped 10 tonnes of mercury, a potent neurotoxin, into the English-Wabigoon River system between 1962 and 1970. The site of the plant, now under different ownership, is about 100 kilometres upstream from Grassy Narrows.

The locals, who’d built a livelihood as fishing and hunting guides, were told to stop eating the fish. The robust fishing tourism industry was decimated. The fishermen and guides went on welfare.

More than 300 residents (50 of them children) from Grassy Narrows and another community were diagnosed with “symptoms consistent with mercury poisoning” — including loss of muscle co-ordination, vision loss, slurred speech and tunnel vision — and awarded compensation from a Mercury Disability Board. A separate protocol was set up for children that also tests for cerebral palsy and some developmental delays. 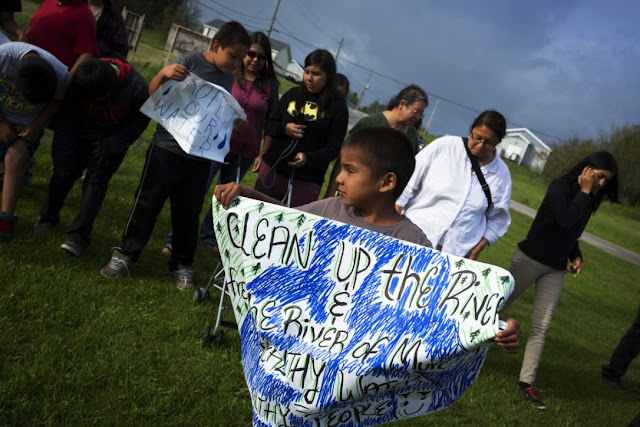